Our daughter, Alexandra said to me, “Luca and I would like a simple, meaningful wedding in Madrid and then perhaps a small celebration in Los Angeles.” And last Wednesday, on a warm evening, we carried out those wishes for a classic casual wedding in Madrid (with major help from her maid-of-honor, Jane, and my sister Teresa who is also Alexandra’s godmother).

The Spain vacation with our Florida friends that had been planned last year was rescheduled for this year. And in the meantime, our daughter, Alexandra became engaged to Luca, who was born in Spain and his father, stepmother, and siblings live in Madrid. So, having their wedding in Madrid made sense!

Instead of my Five Faves today, my friend and guest, Ariana Alfonso and I would like to share with you the informal photographs of that magical night. We will have the professional ones posted later. At the end of the post, please check out what Annie and Cindy’s faves are this week.

The wedding was held in the heart of Madrid,  by the Plaza Mayor. Guests stayed in the charming Hotel Pestana which was part of the plaza. The family all walked together through the plaza to the nearby church, Saint Gines.

Walking Through The Plaza Major 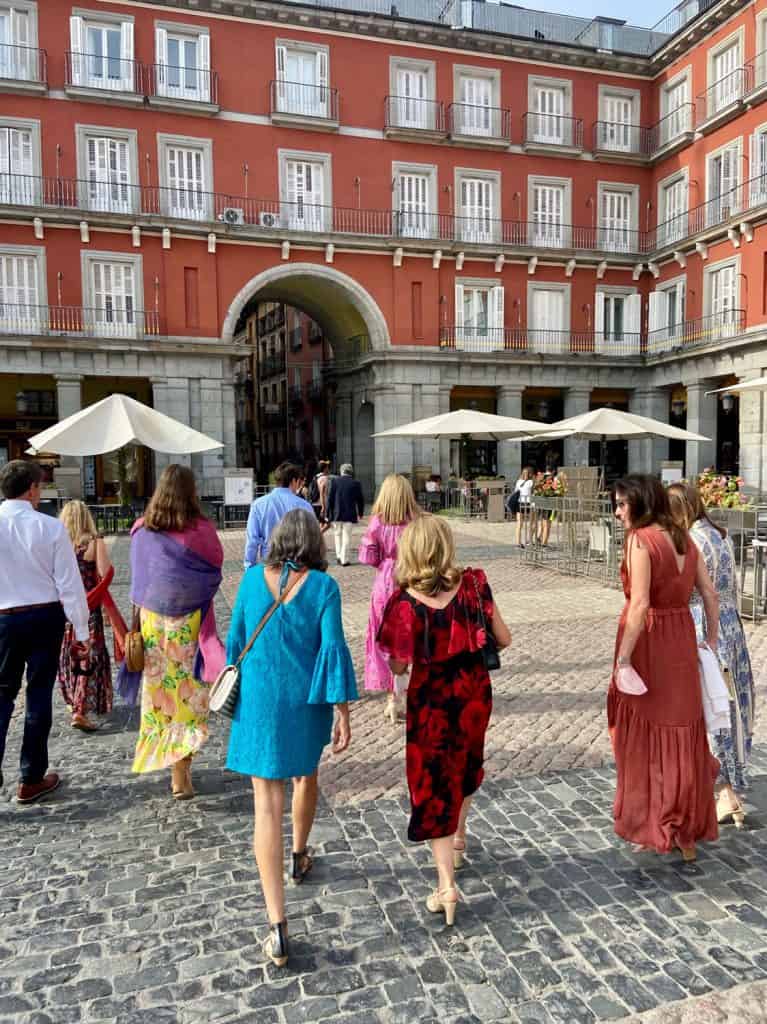 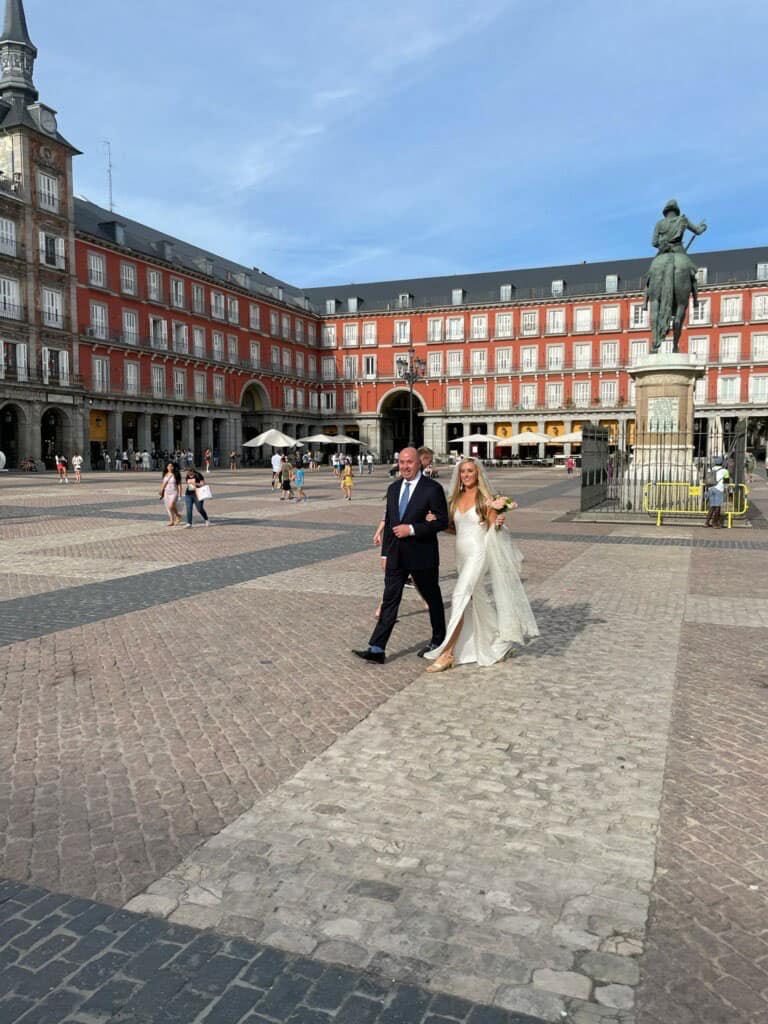 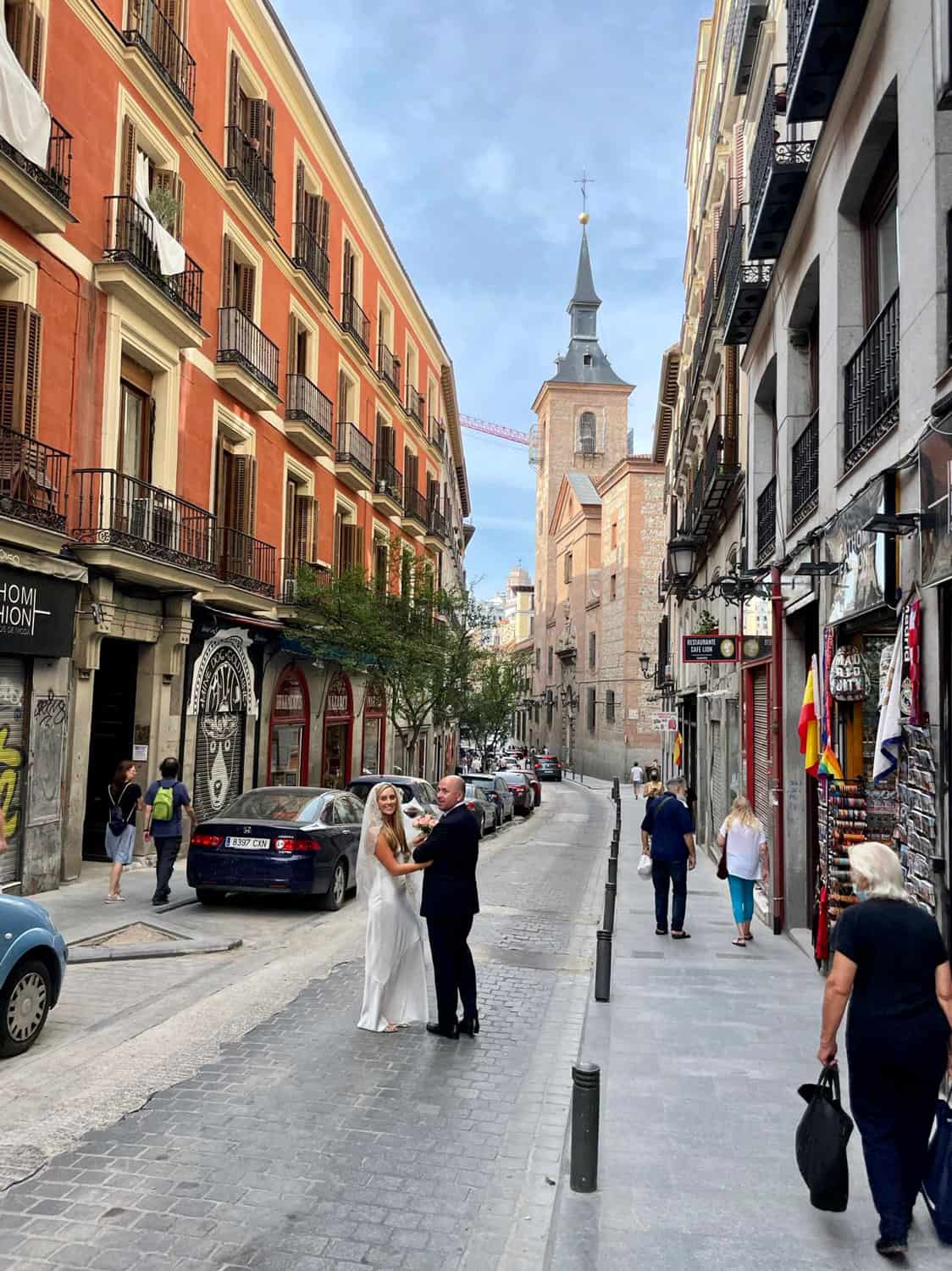 The wedding ceremony was held at the nearby Church of San Gines. The history of the church dates back to 1106! The ceremony was a meaningful celebration, and although it was in Spanish, the priest was thoughtful to hand out his beautiful sermon in English so we could follow along with the mass. 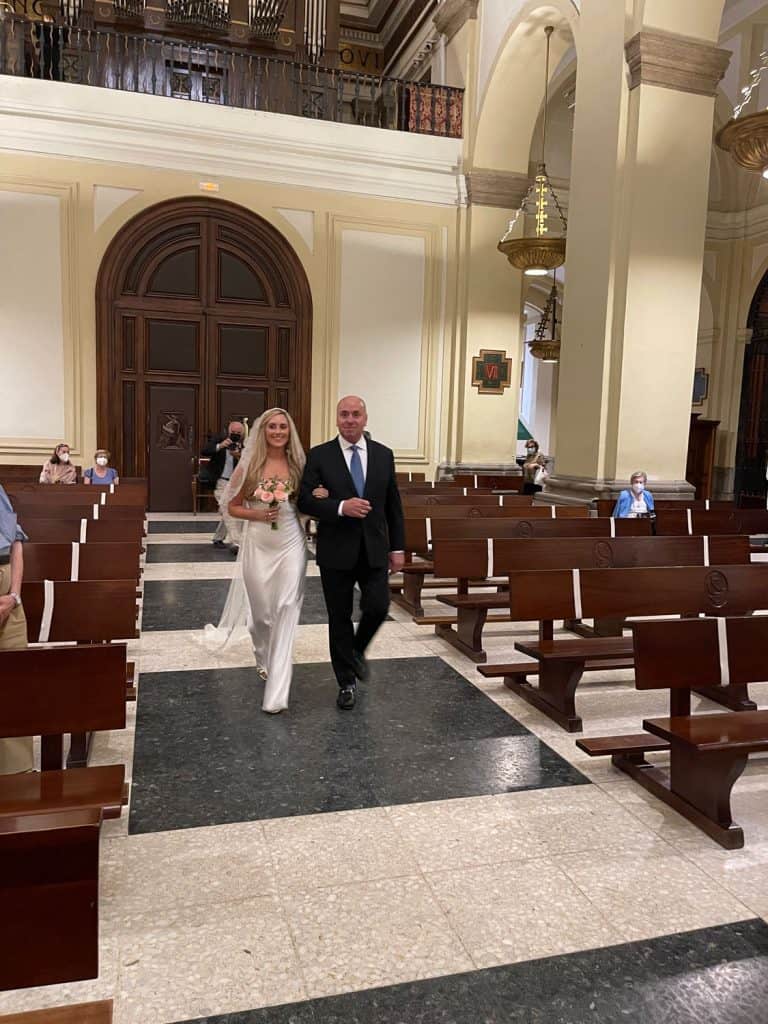 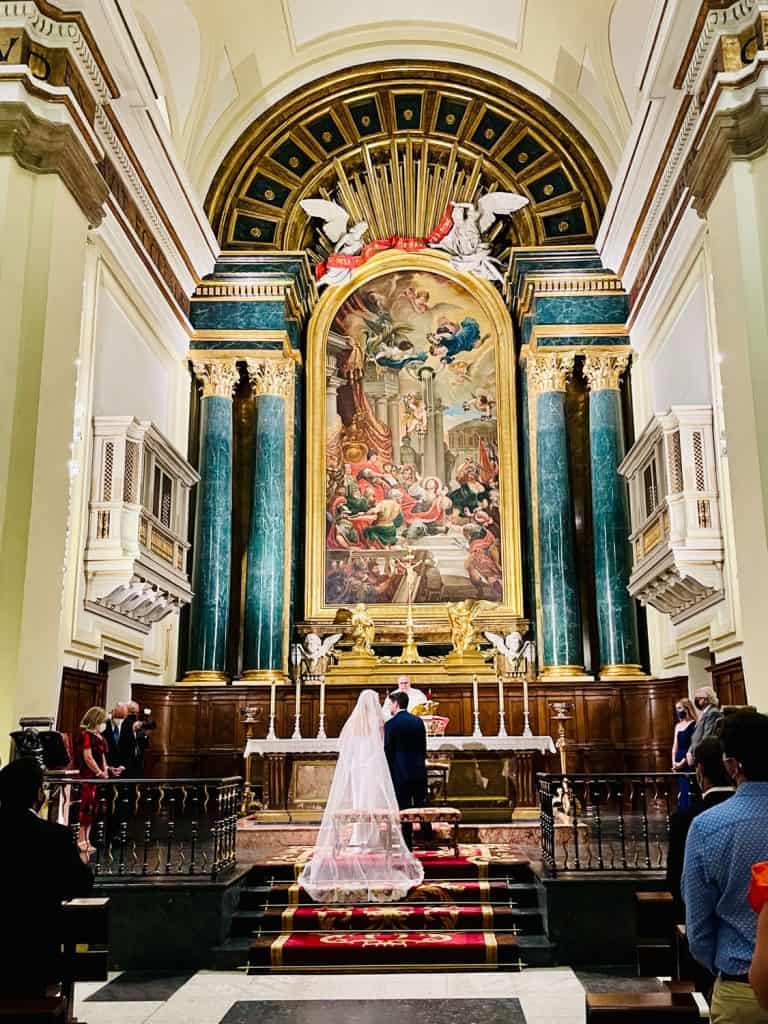 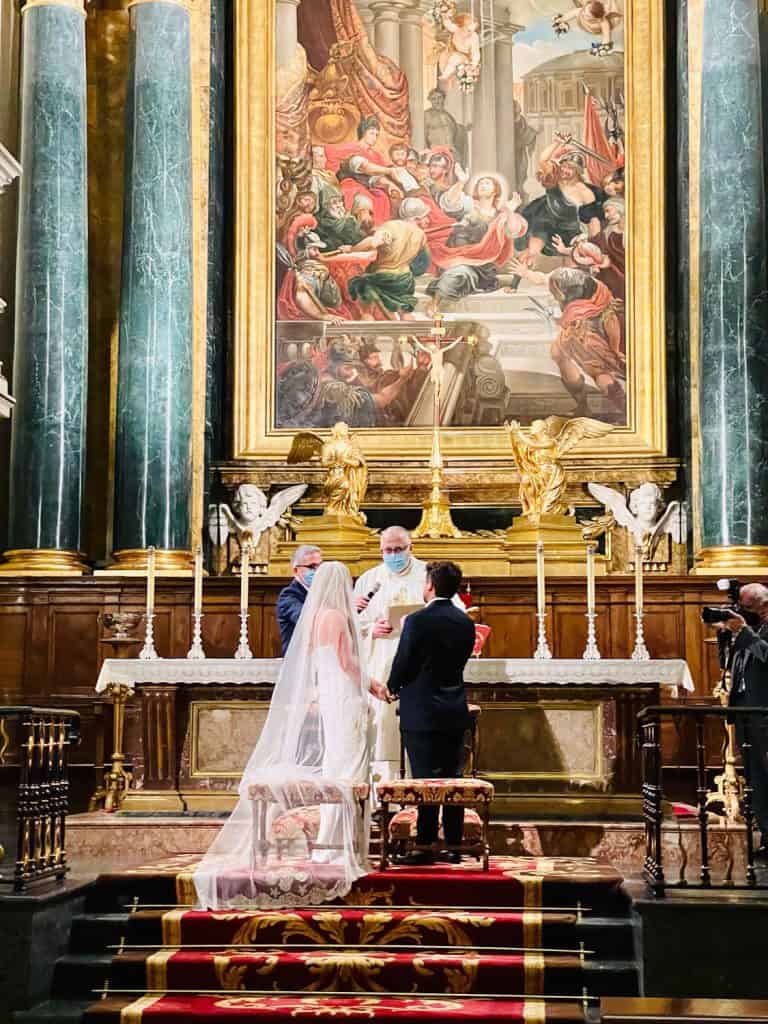 Alexandra is known for mixing old-world vintage style with newer pieces. Similarly, the wedding was a mixture of old and new. Alexandra wore a modern dress with a borrowed veil and vintage pearl earrings.

One of the old traditions in Spain is the box of “arras”, or coins. The couple exchanges these coins during the mass as a way to bless their marriage with prosperity.

Alexandra wanted classic, simple flowers. Her godmother Teresa and I went to a local florist the day of the wedding and picked up this beautiful arrangement with pink roses, and flowered mint. 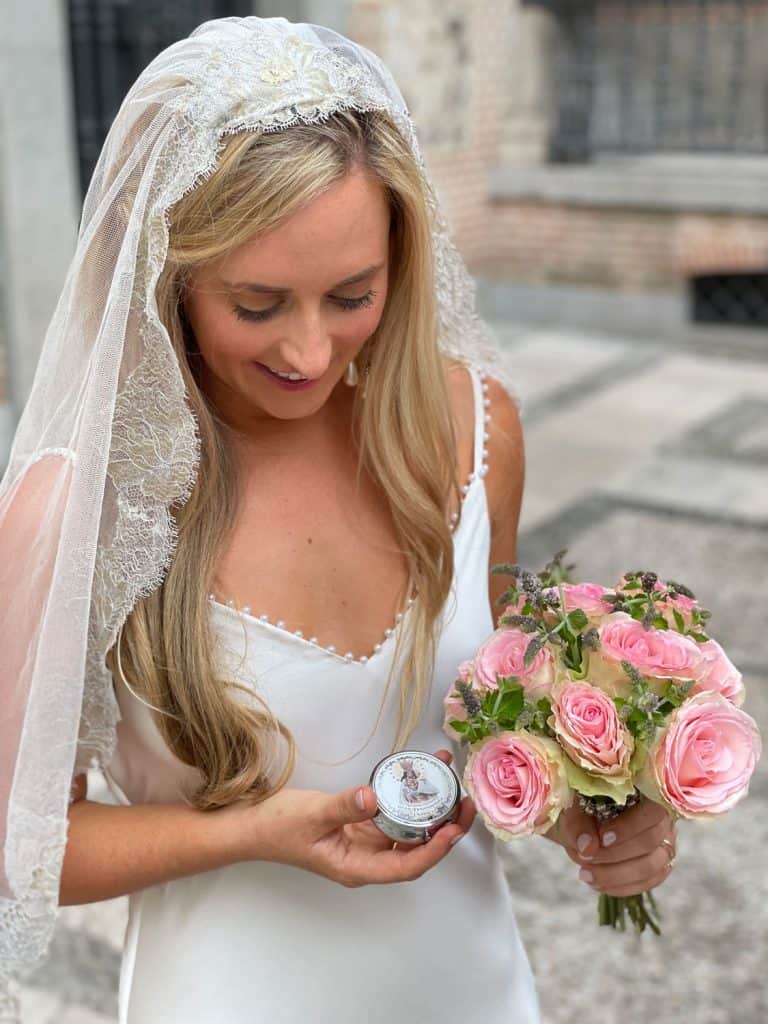 We are thrilled to welcome such a wonderful man like Luca into our family.

I wore a well-priced dress that really leaned into the Spanish theme. 🙂 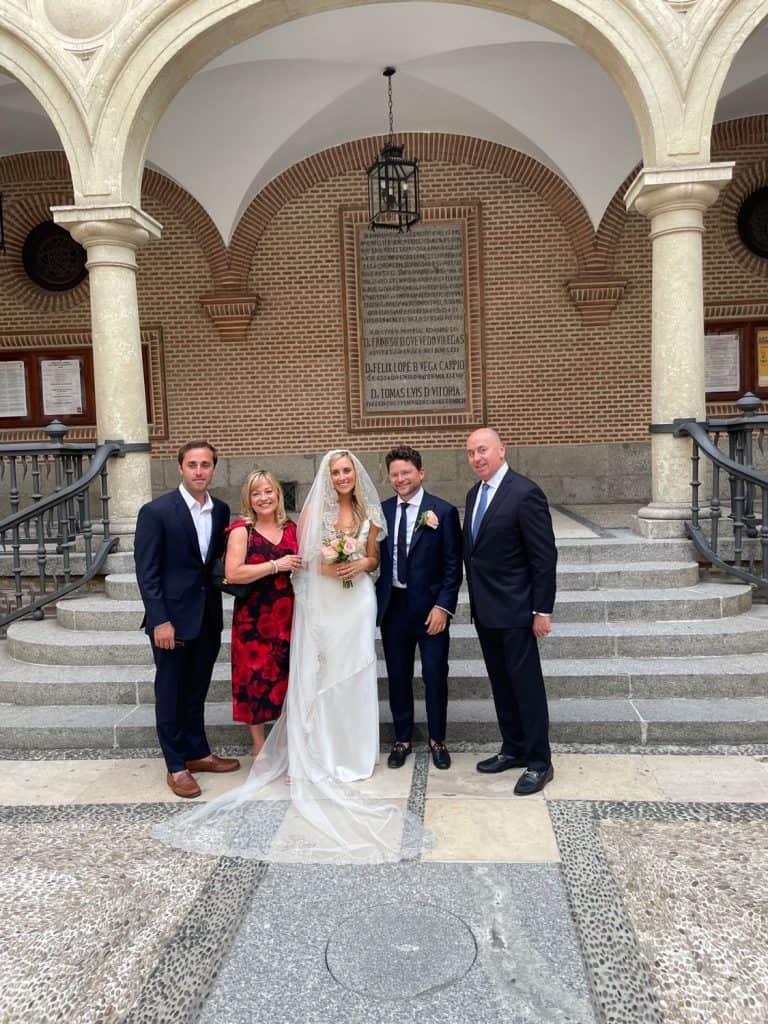 Beloved Guests after the Ceremony

Here is my sister Teresa with the new bride. 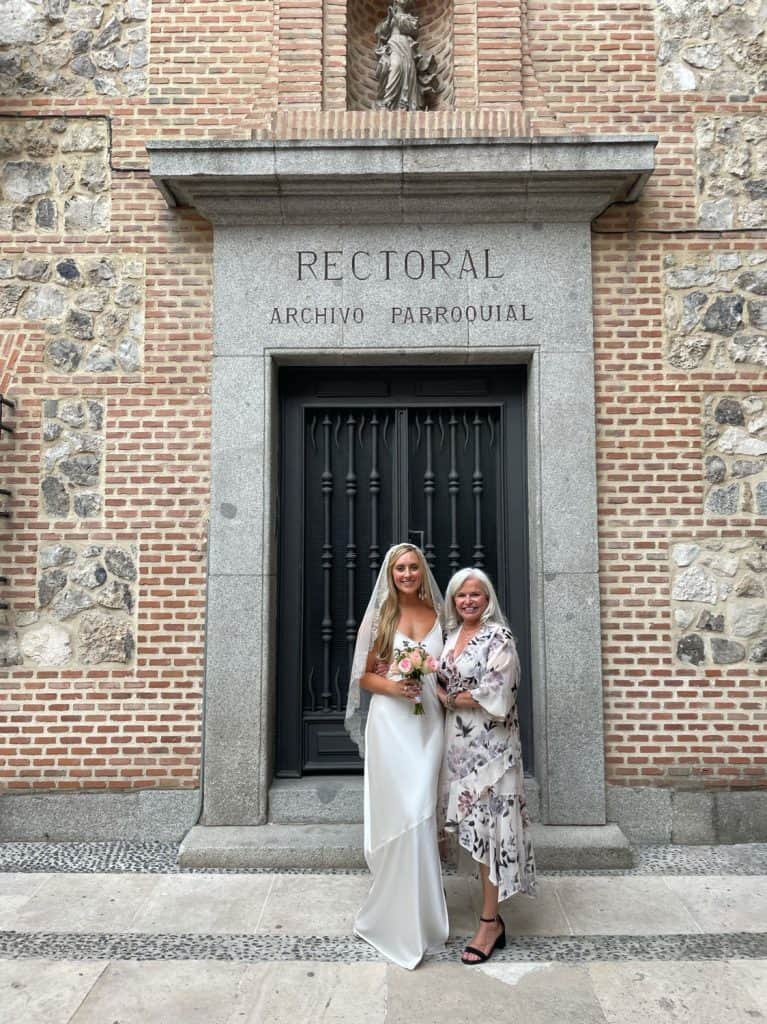 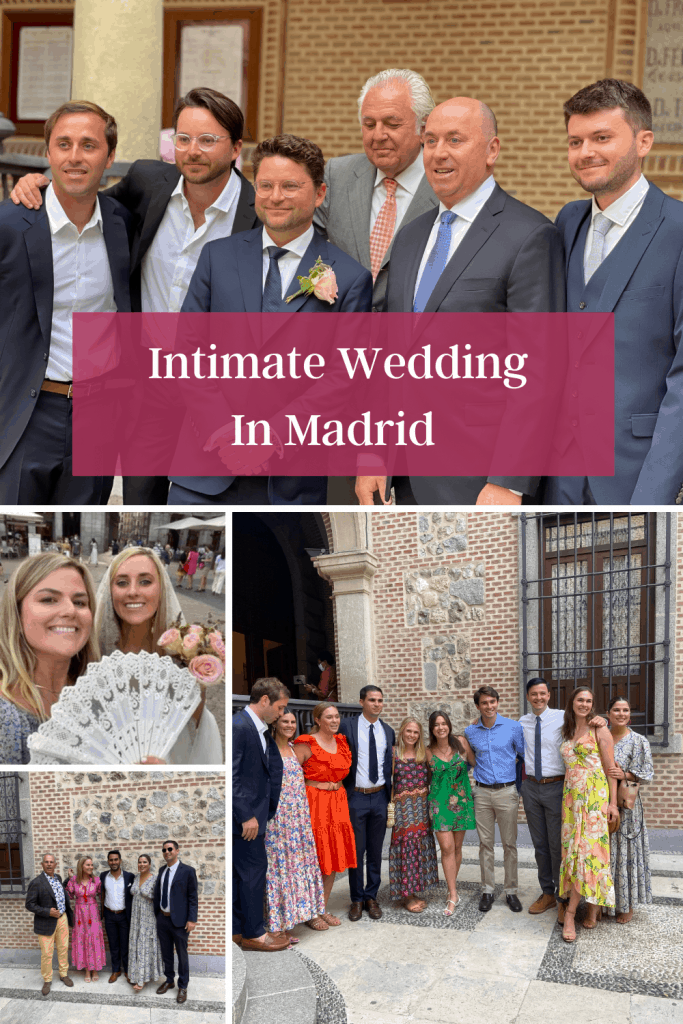 We held the reception at the world’s oldest restaurant, Restaurante Botín.

“Casa Botín, founded in 1725, is the oldest restaurant in the world according to the Guinness Book of Records and a benchmark of Madrid’s best traditional cuisine. Forbes magazine gave Botín third place in the list of the world’s top 10 classic restaurants, together with its two specialties, the delicious suckling pig and lamb roasted in the Castilian style.”

The happy couple arrived first while the guests grabbed drinks in the nearby Plaza. As we walked up, they were greeting us from the balcony. It was an exciting moment for everyone! 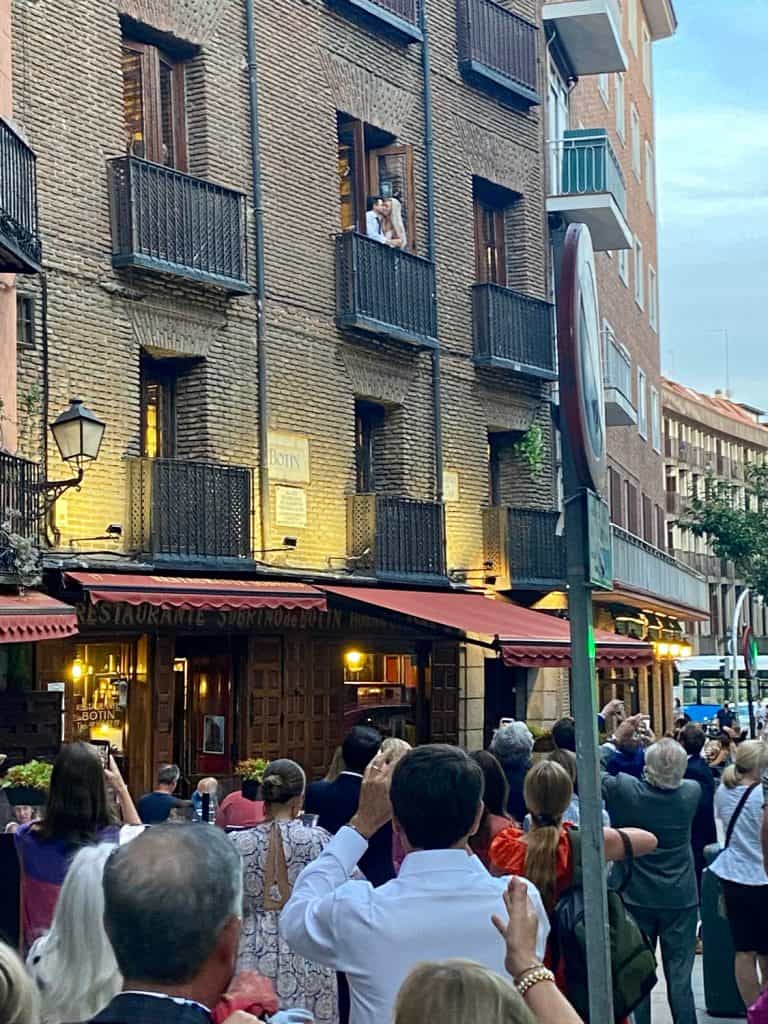 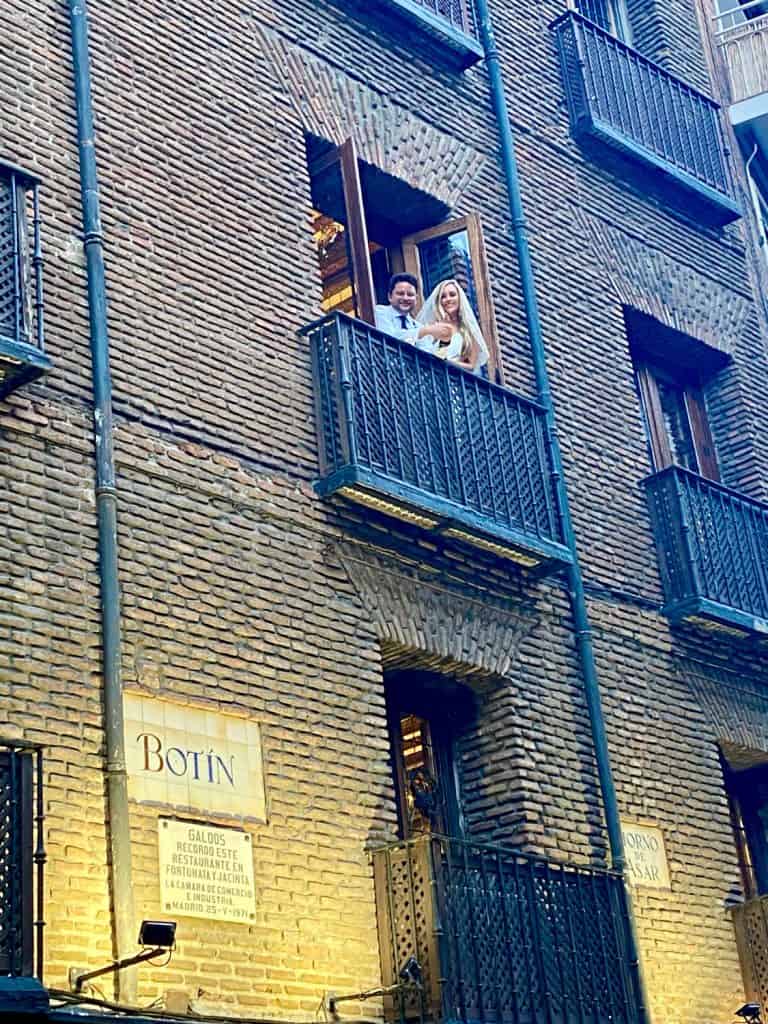 We came early to set the tables with red fans that also served as place cards for the guests. The restaurant gave us a large room on the top floor and were all able to fit at one long table that really made the Spaniards and Americans all feel like family! 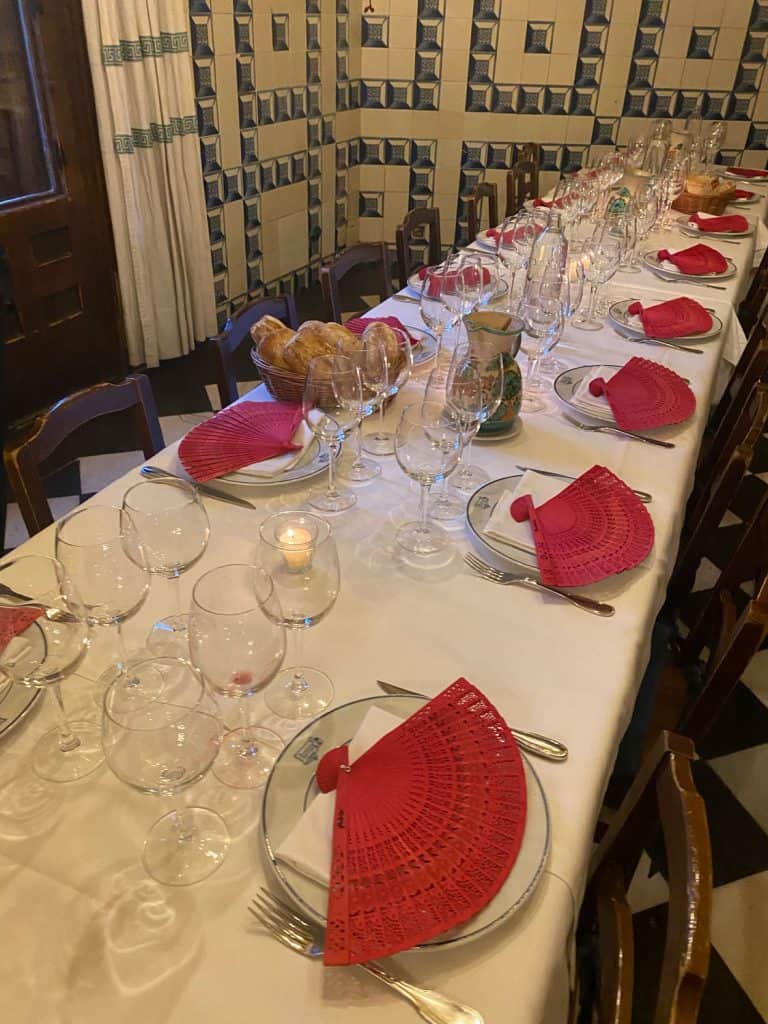 Alexandra swapped her veil for a vintage pearl headpiece that set the tone for the fun night to follow. 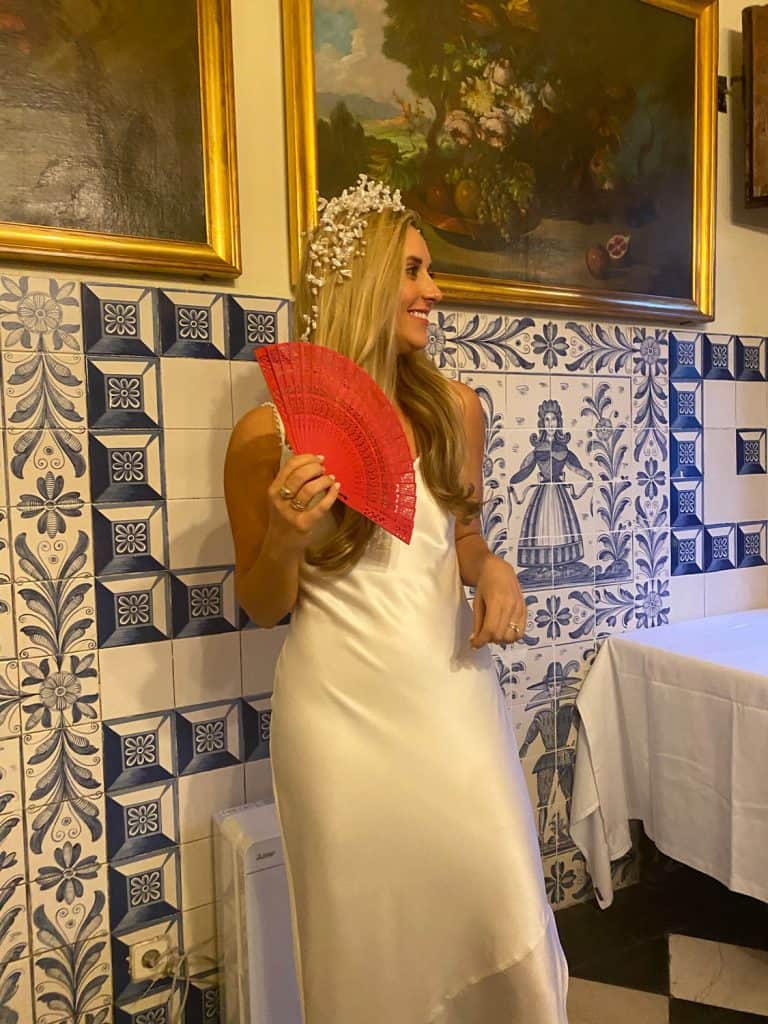 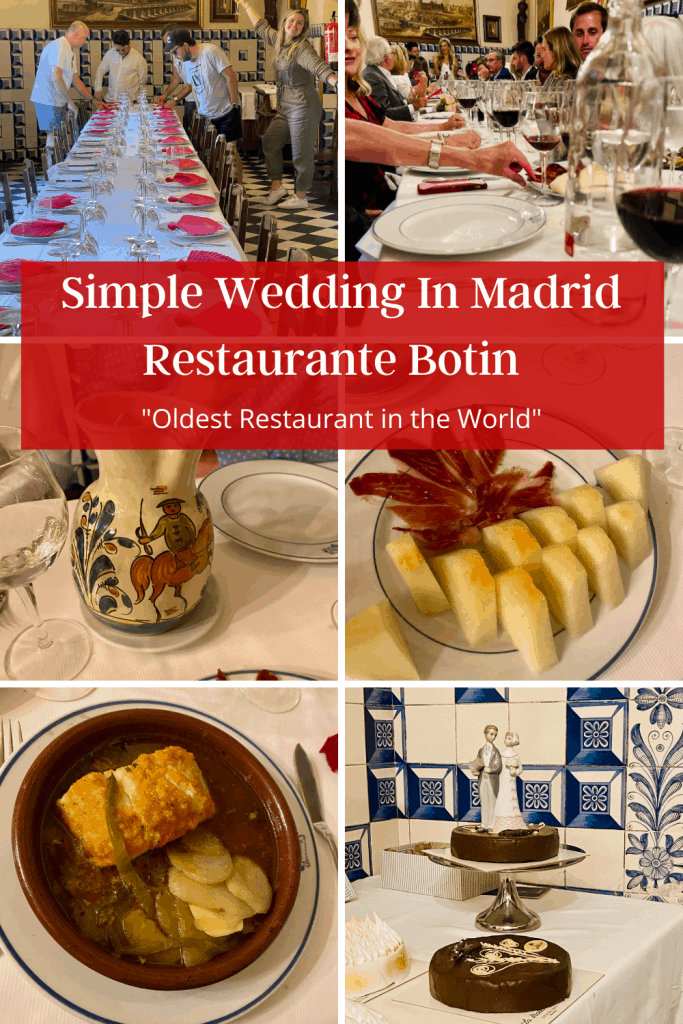 The restaurant served a traditional Spanish dinner of fresh fish and suckling pig, with Sangria. Appetizers were a refreshing melon paired with the famous Jamón Iberico. The groom’s brother recommended his favorite bakery where we picked up delicious chocolate cake and toasted meringue.

The reception dinner went until 1 AM, with wine flowing, speeches from everyone, and napkin-twirling chants for Réal Madrid

Despite the late-night reception, the young people still had energy! They partied late into the night in the middle of the Plaza, fueled by the joy (and maybe a little gin). My son Thomas even brought a Bluetooth speaker – I’m surprised they didn’t get in trouble! For the record – I don’t recommend this. 🙂 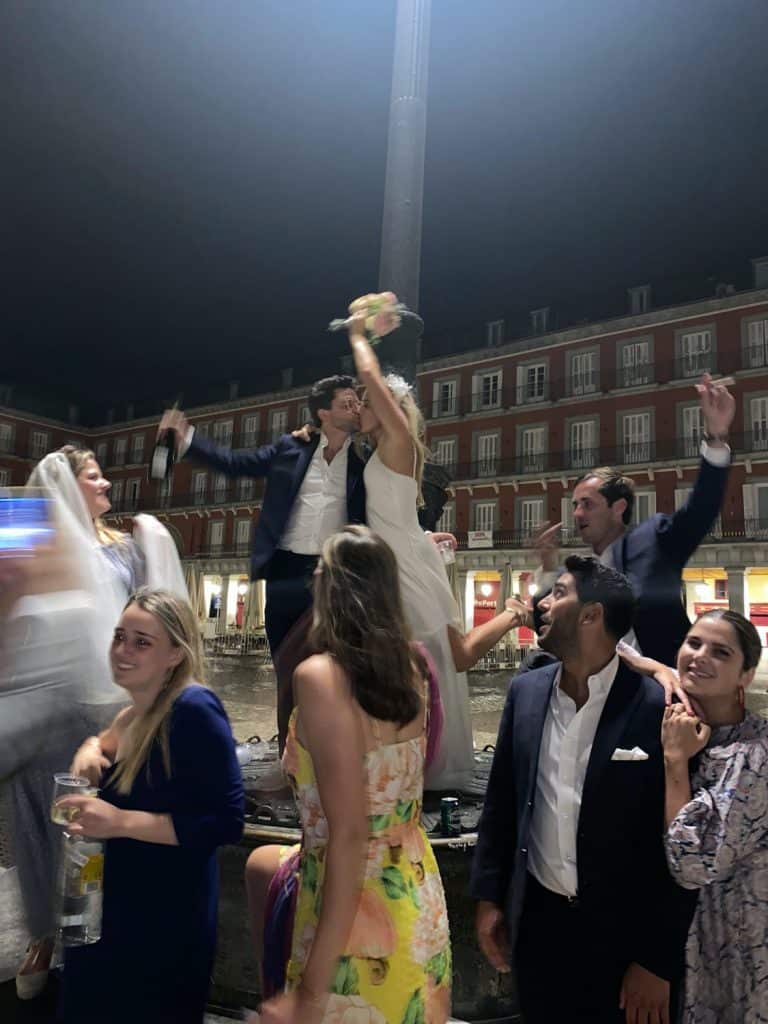 That was our classic casual wedding in Madrid! You may also like Beautiful Coastal Wedding Part Two.