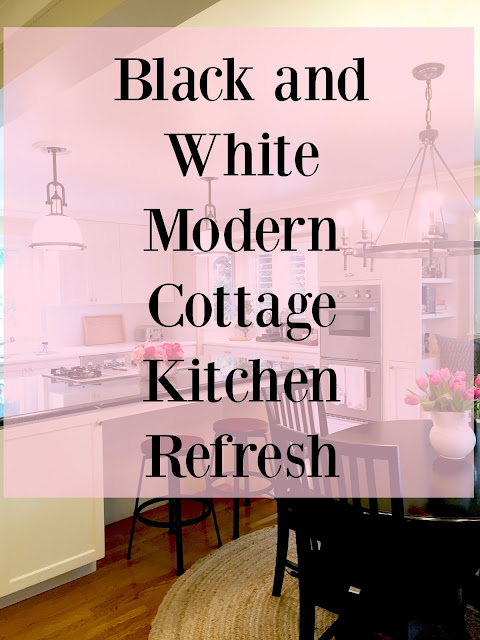 We brought JoAnn’s 20 year old kitchen up-to-date with fresh fabrics and lighting!
It was time for it…  Don’t judge as this French country look was chic back in the day. 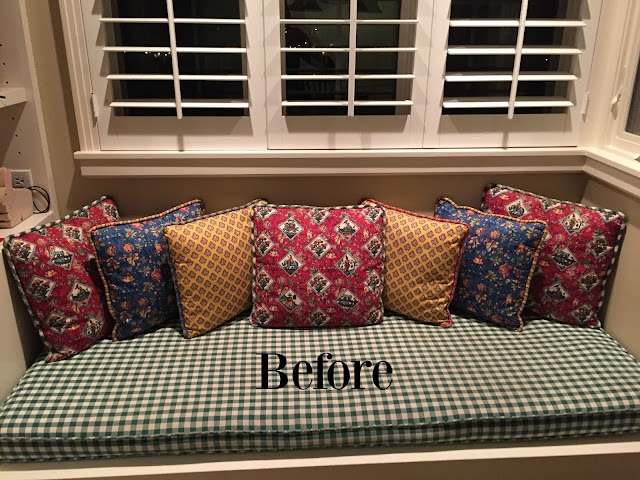 Welcome to JoAnn’s rose abundant home in Lafayette, California.
Can you spot my intern, Chief? 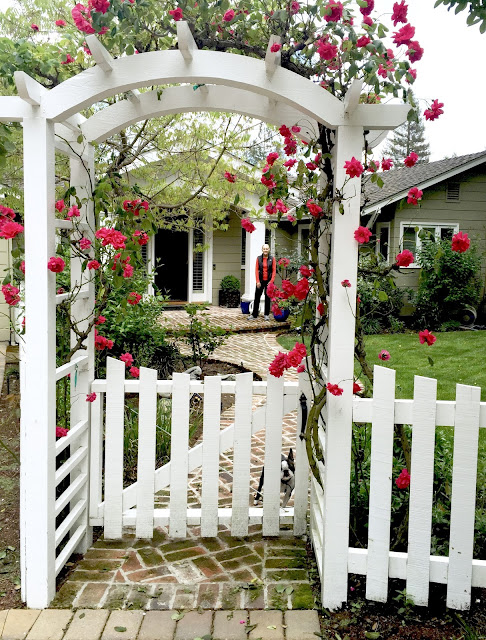 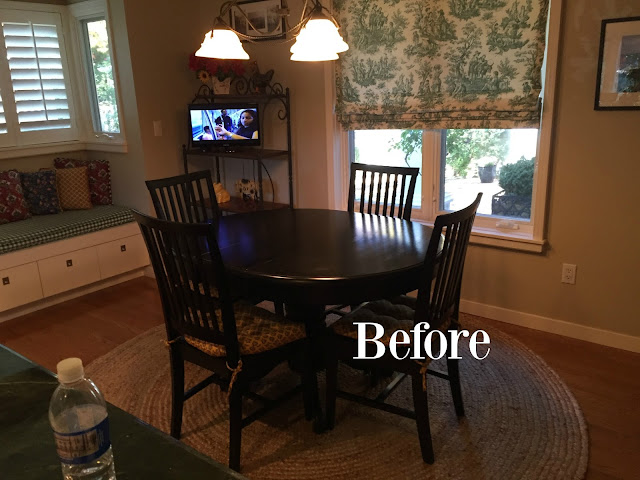 Now she wants a look that is more “Modern Cottage with Neutrals.”
So, we have a new bronze chandelier from Pottery Barn over the table…notice the round bulbs. 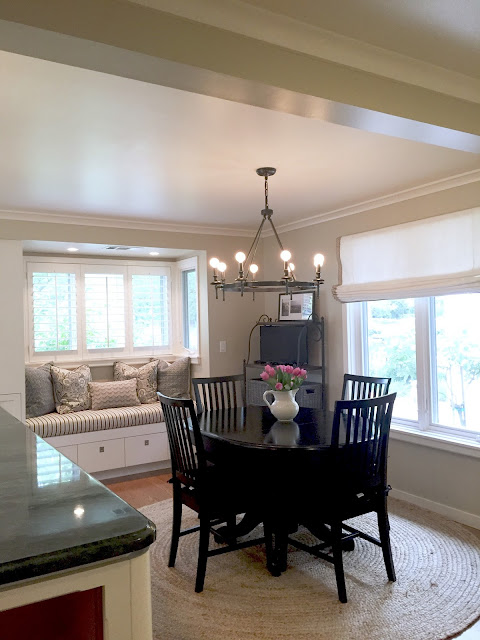 I suggested adding baskets to the baker’s rack to give it some weight, organization and to hide the dreaded television cords. 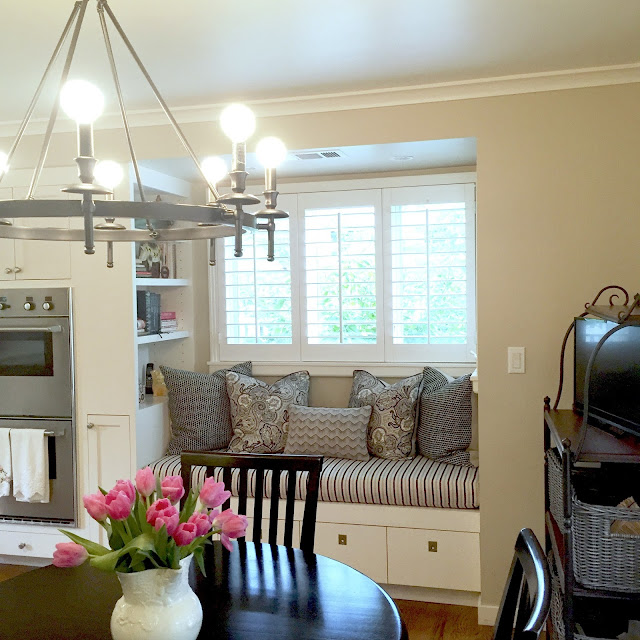 The Roman shade was replaced with an outside mount white linen one trimmed in a neutral Greek Key from Smith and Noble.  It was an overcast day so I had to take the photos with the lights on…which isn’t my preference but oh well. 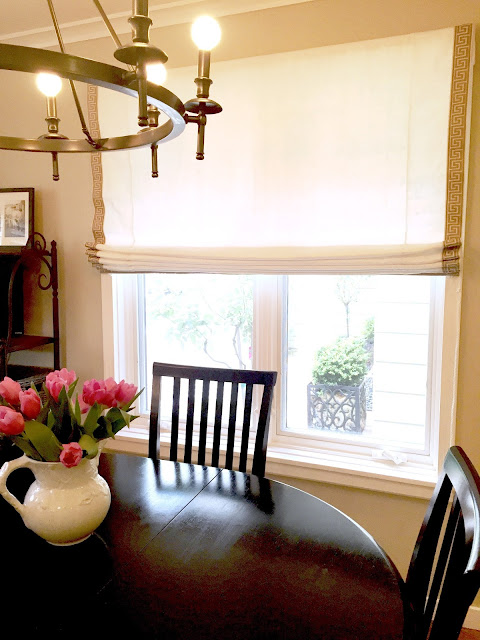 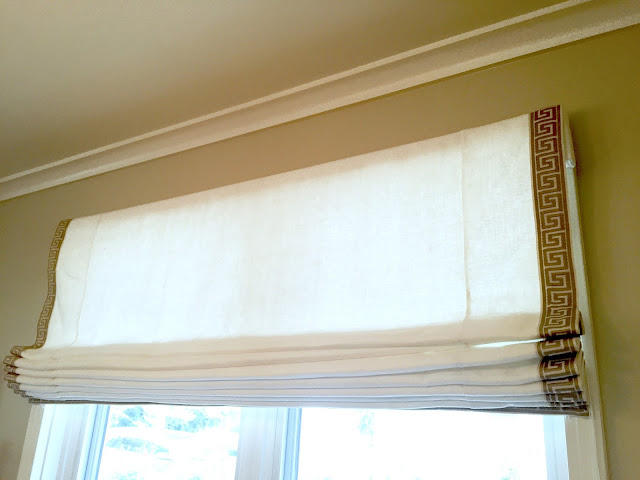 Two pendants from Ballard Designs were placed over the island (where before we had two recessed lights).  We covered the larger holes with white ceiling medallions from Lowe’s. 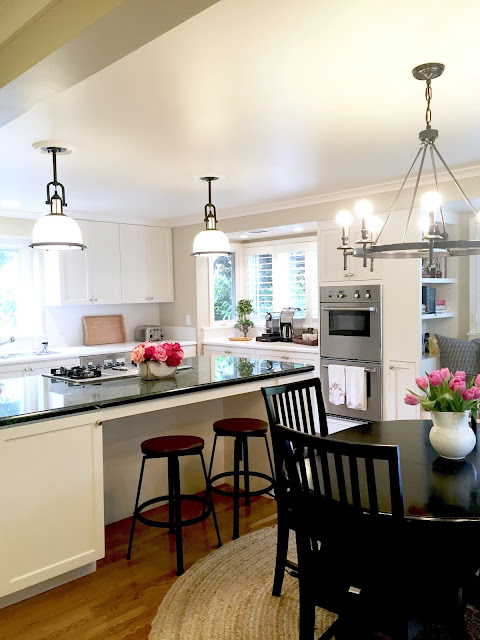 I clipped roses from JoAnn’s garden while Chief ran laps around on her grass (poor city dog doesn’t get a lot of grass). 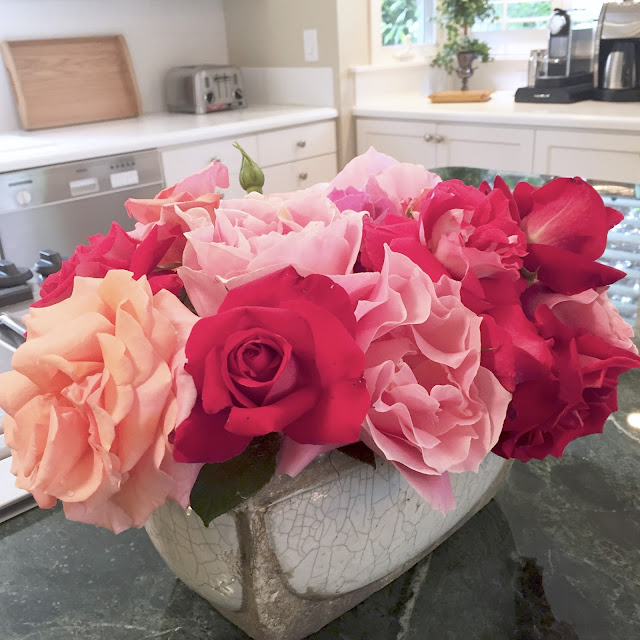 The new industrial bar stools are from Target.  A little industrial is an instant update. 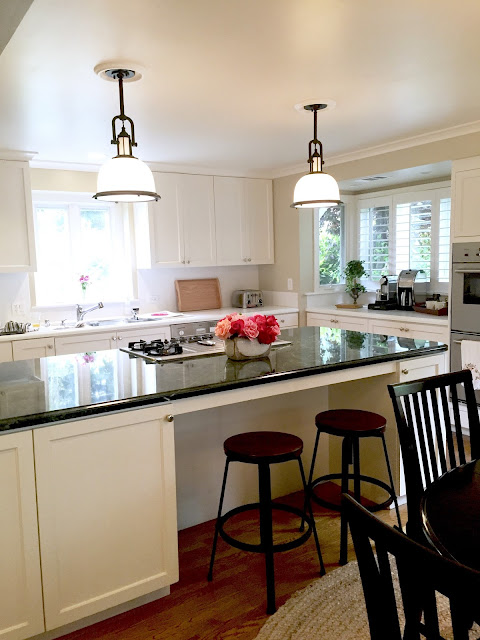 A nice coffee station was set up. 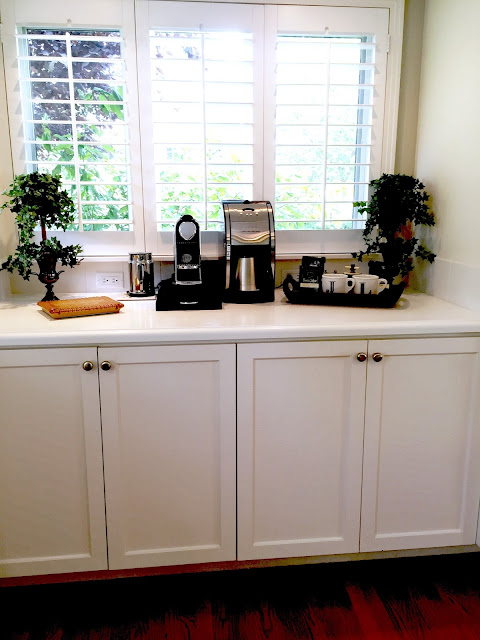 My favorite thing about the kitchen is the revamped window seat and pillows. 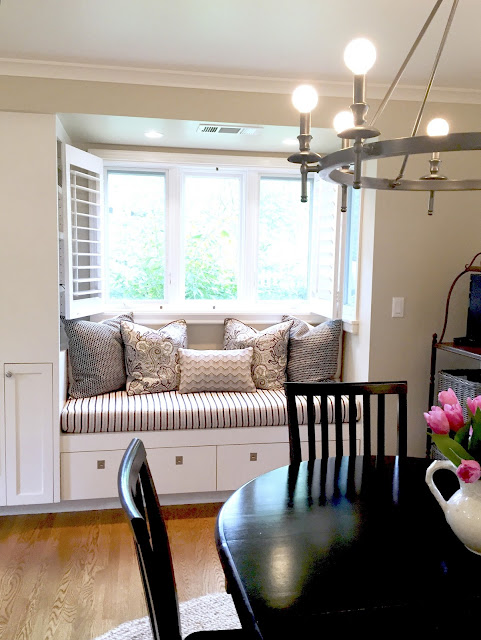 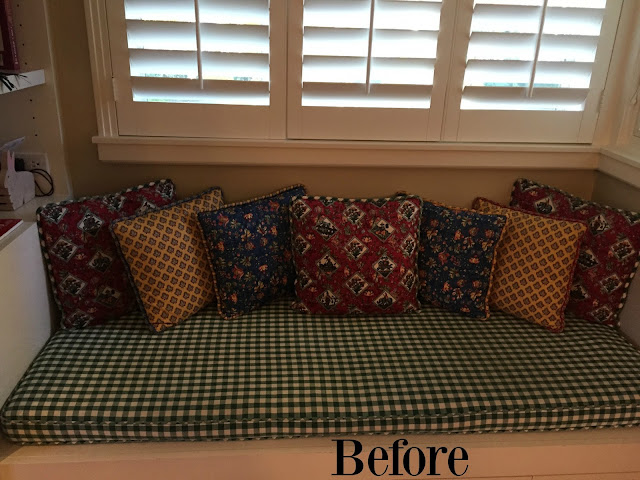 We made the new seat cushion out of Ralph Lauren Calvados Ticking with thicker foam and topstitching.  All the pillows were expertly made by Liana.  The dot is Lee Jofa Kaya Coal and the paisley is Kravet Habeas 81.  The center lumbar is by Kelly Wearstler Tempest for Groundworks. 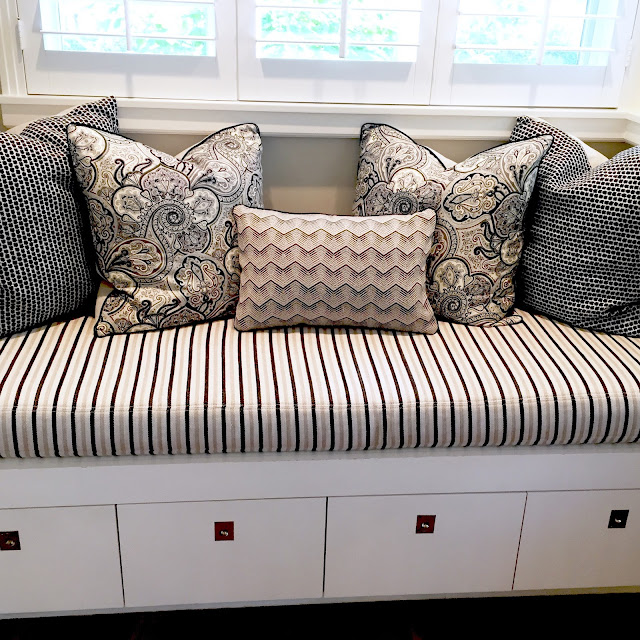 Just clearing and organizing your counter tops can make your kitchen feel fresh. 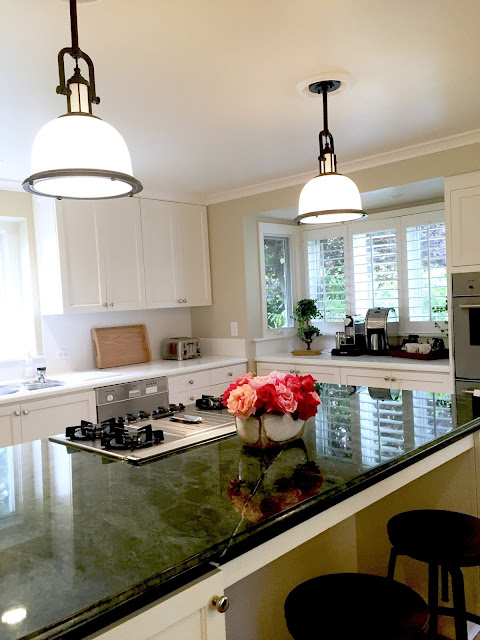 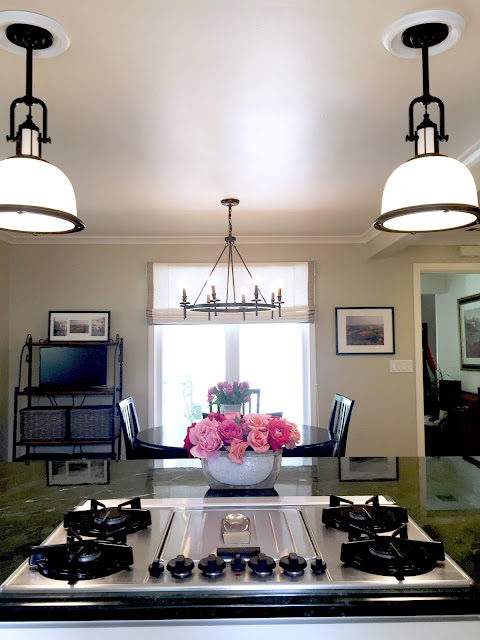 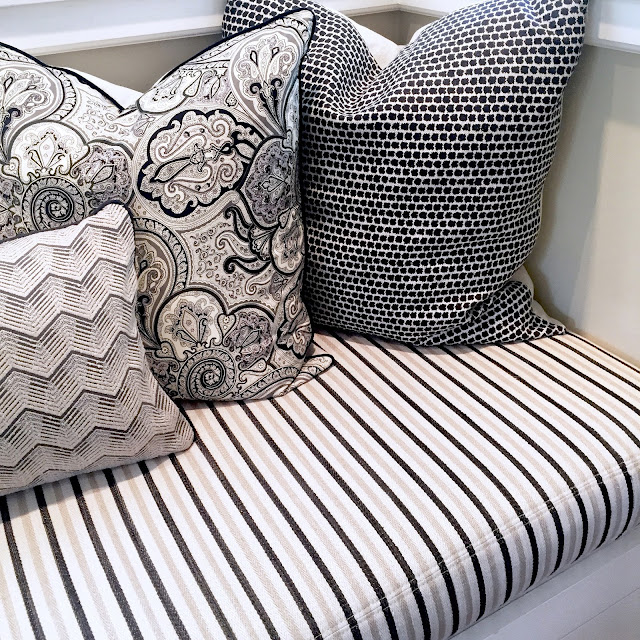 A new rug and end table can make all the differenc

It’s been a while since we’ve had company that

Our son @tommy_pickett sent this photo today that

Favorite things like this book and my outfit of th

Swipe left for the before photo of this kitchen. M